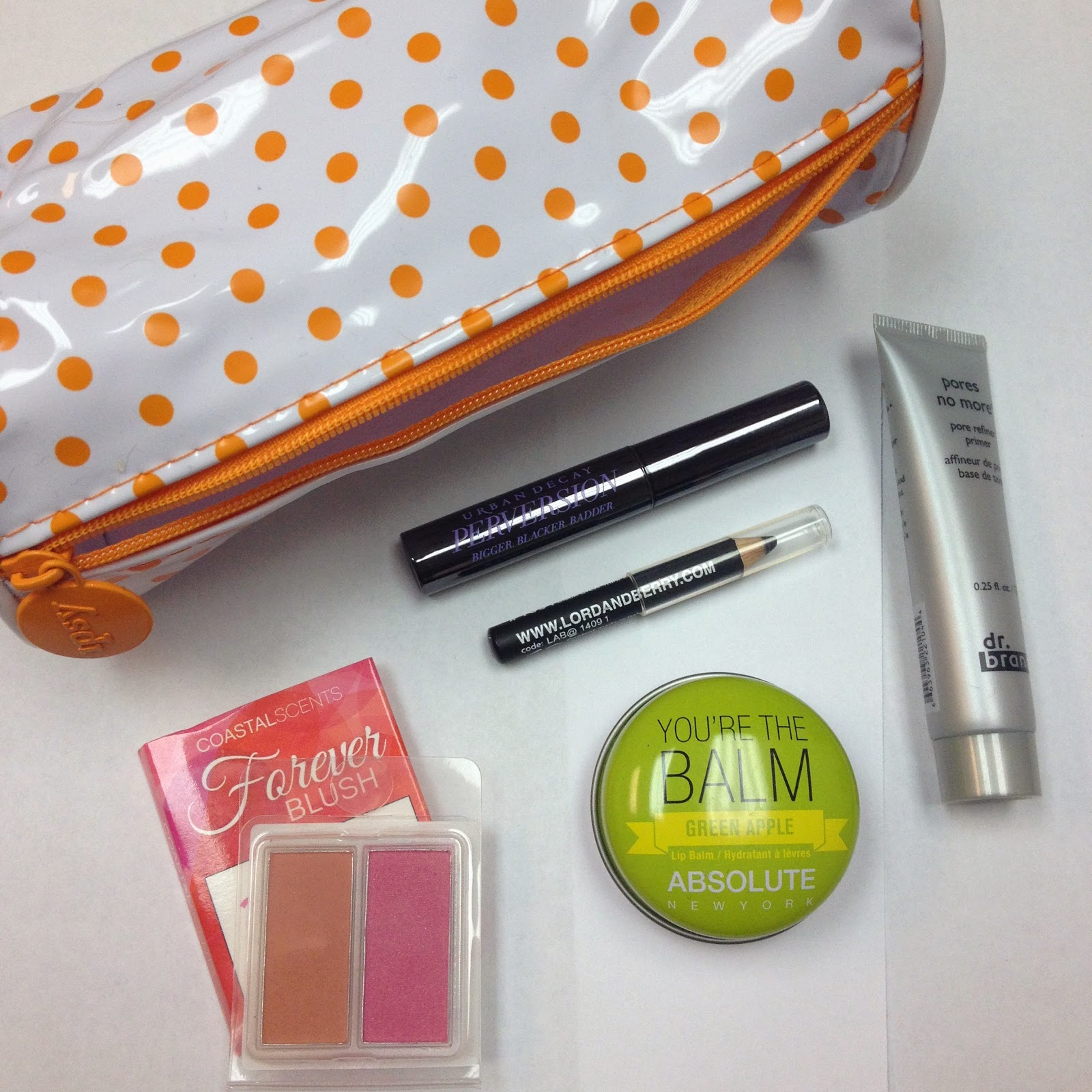 Hey, all!
Another month, another ipsy bag! Woohoo! I was actually quite pleased with this one. Only one dud! Here is my list of best to worst.

1. Urban Decay Perversion mascara - For the longest time Benefit's They're Real mascara was my holy grail. I'm thinking it now has competition. Perversion gives such beautiful volume, it lengthens, it doesn't flake or smudge, and it's easy to remove. It's ever so slightly clumpy, but in a good way. It makes my lashes look thicker, but doesn't make it look like I have just four fat, spiky lashes like a lot of other volumizing mascaras. 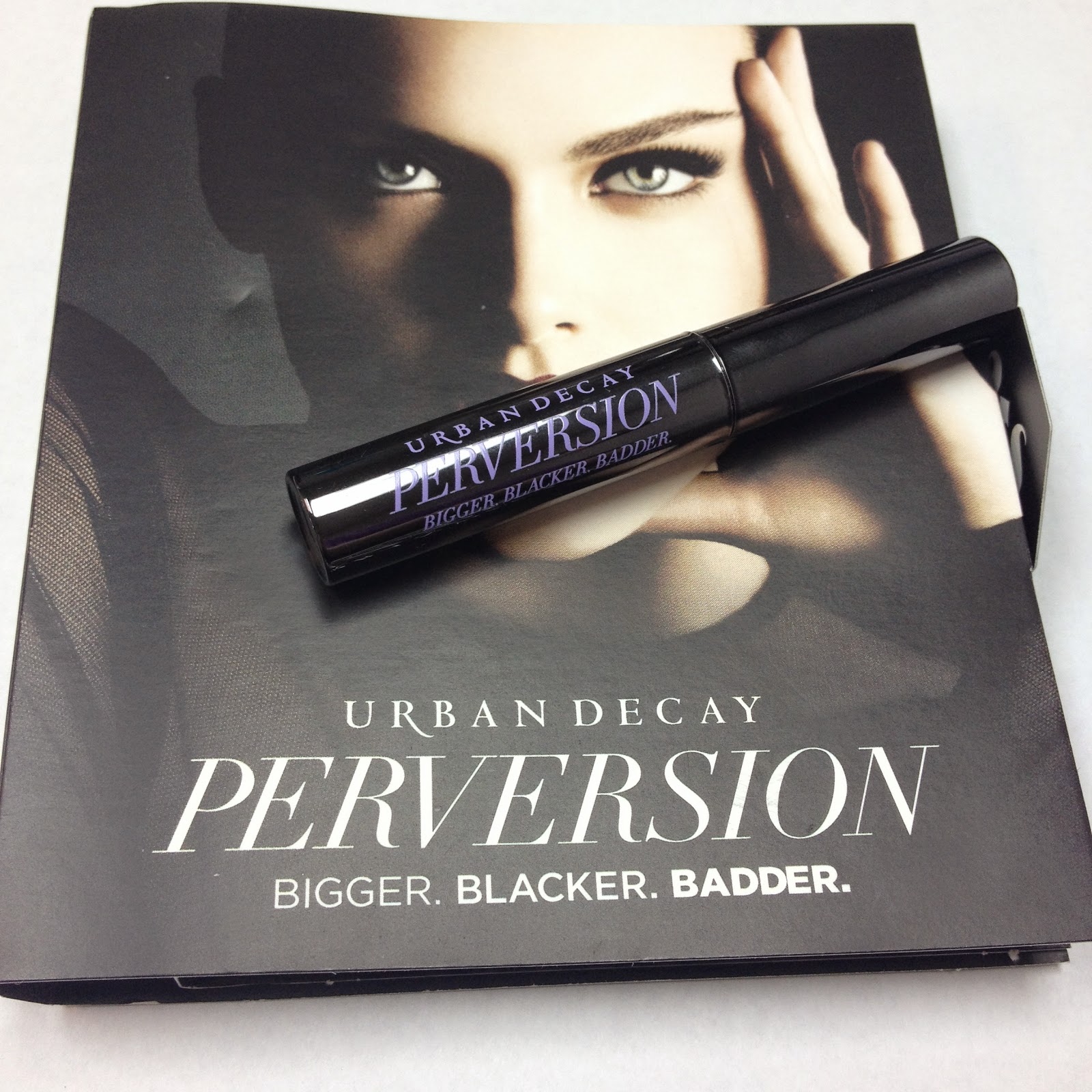 One coat will give you very defined, black lashes. Two coats give a very dramatic effect. The brush is a densely packed bristle brush...my favorite kind. (I tend to poke myself in the eyeball with the plastic bristle kind.) Full size value $22. Sample size value $5.50 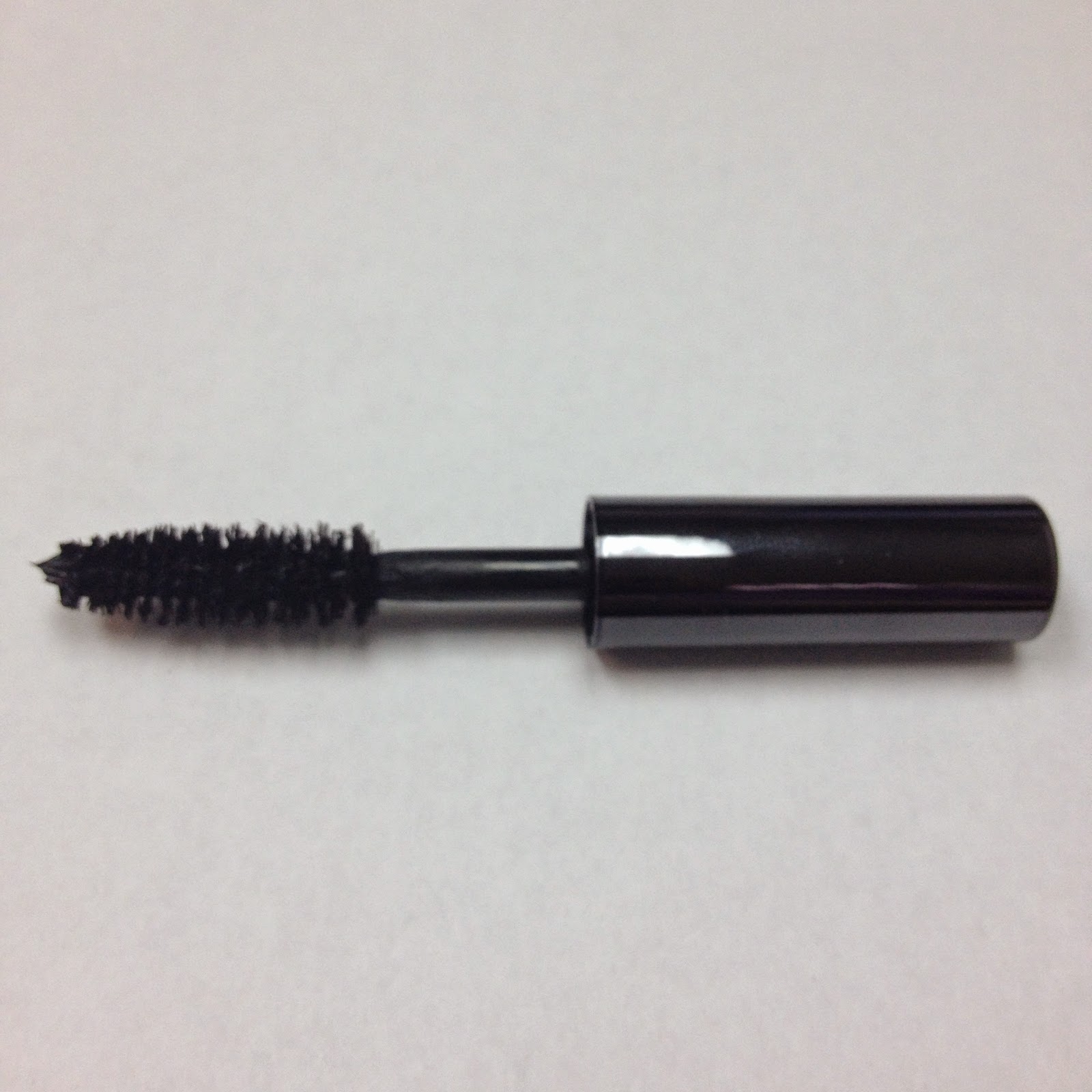 2. Coastal Scents Forever Blush - Shades Fresh (left) and Elegant (right): These tiny pans of color pack a punch! They're so pigmented and the shades are beautiful. I tried using Fresh as a contour, but it's definitely a blush. The pigmentation is so great that you have to use a very light hand. Tip: If you go overboard with blush, just blend it out with some face powder on a big, fluffy brush. 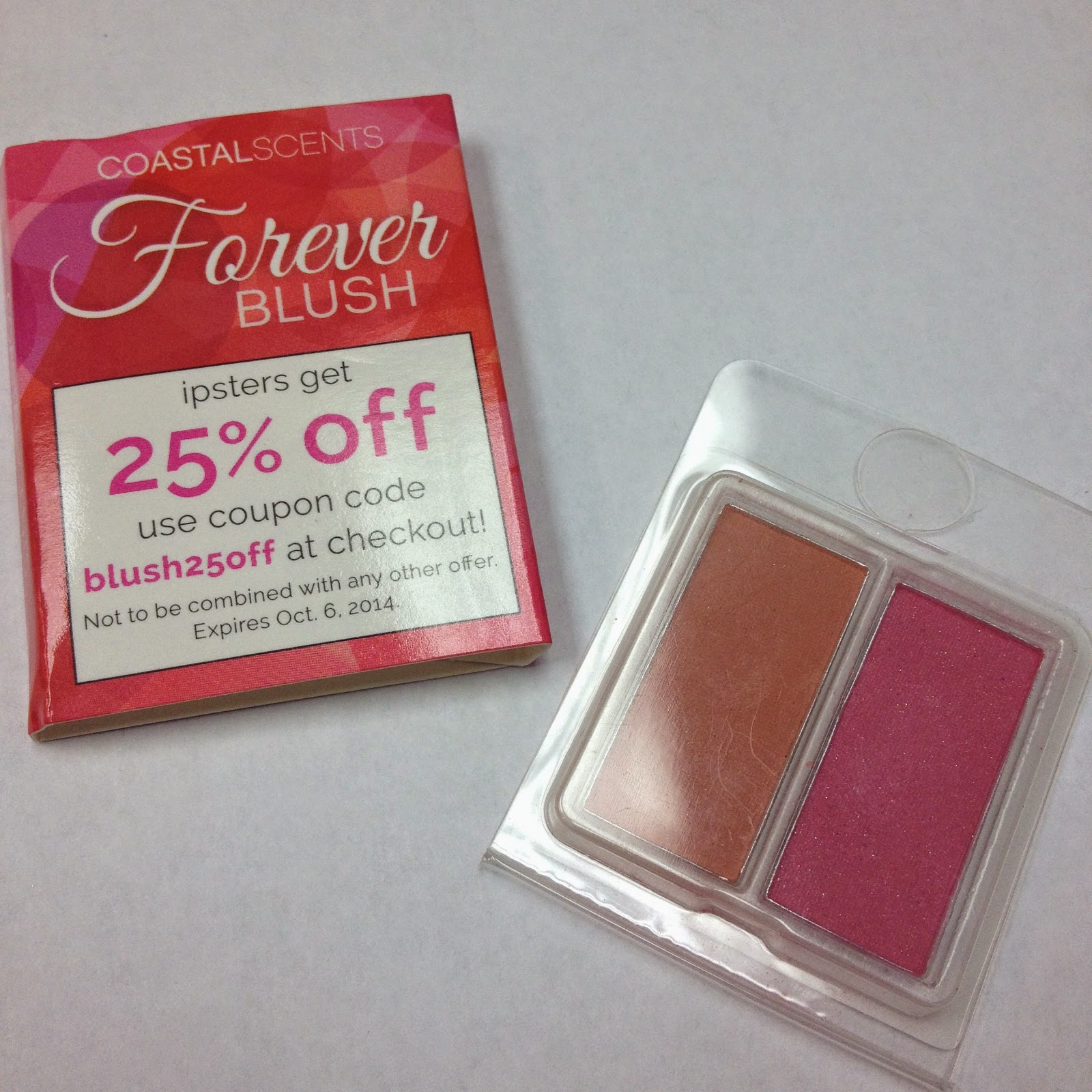 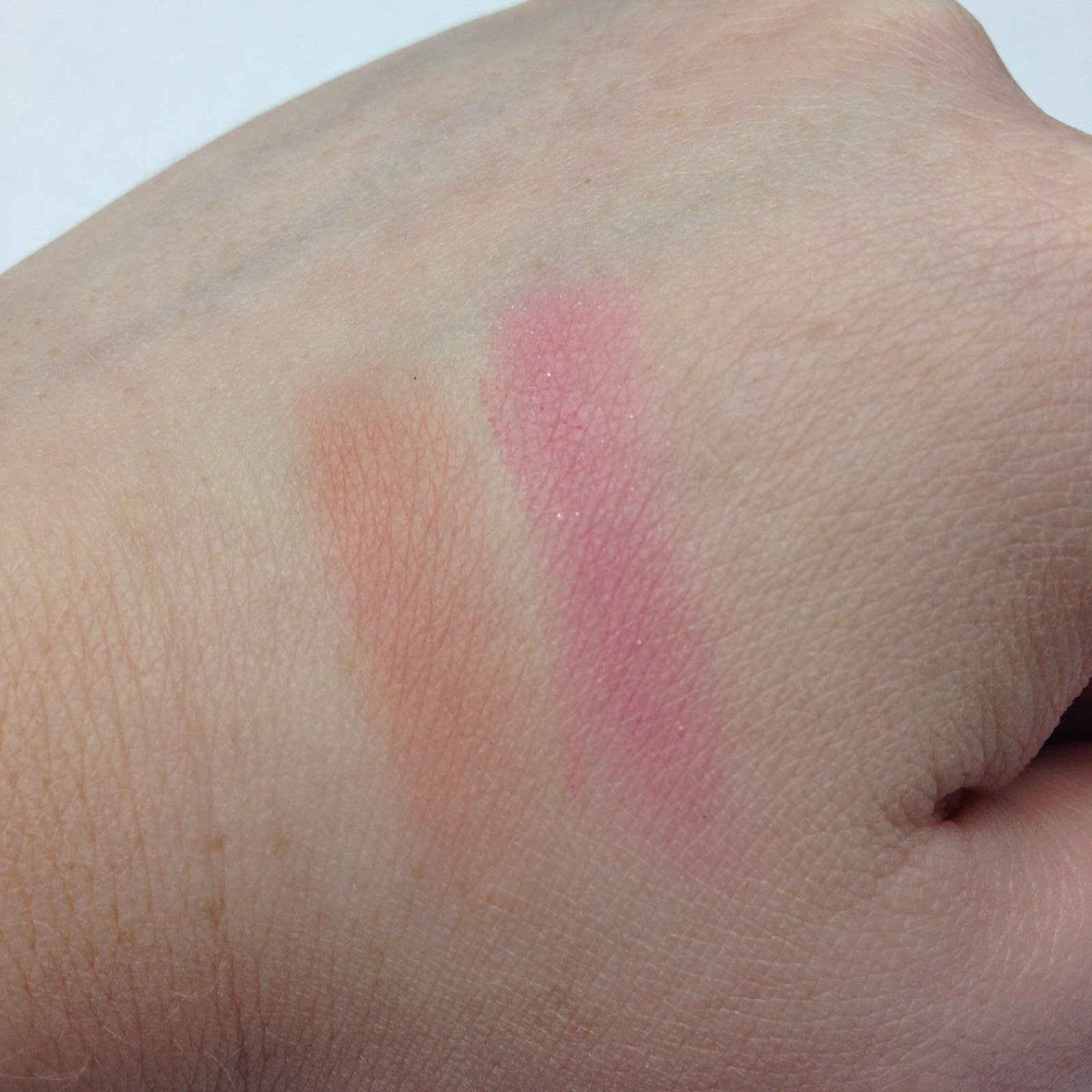 3. Absolute New York You're The Balm in Green Apple - This balm is unbelievable. It's so smooth and moisturizing. It's yummy. I just love it. Even though it's pink in the pan, it goes on sheer. It's perfect under other lip products or just on its own. I'm able to feel it on my lips a few hours after application. While the sample I received is actually full sized, this normally comes as a duo. The other flavor in this set is Grape. Duo value $5.99. Sample value $3. 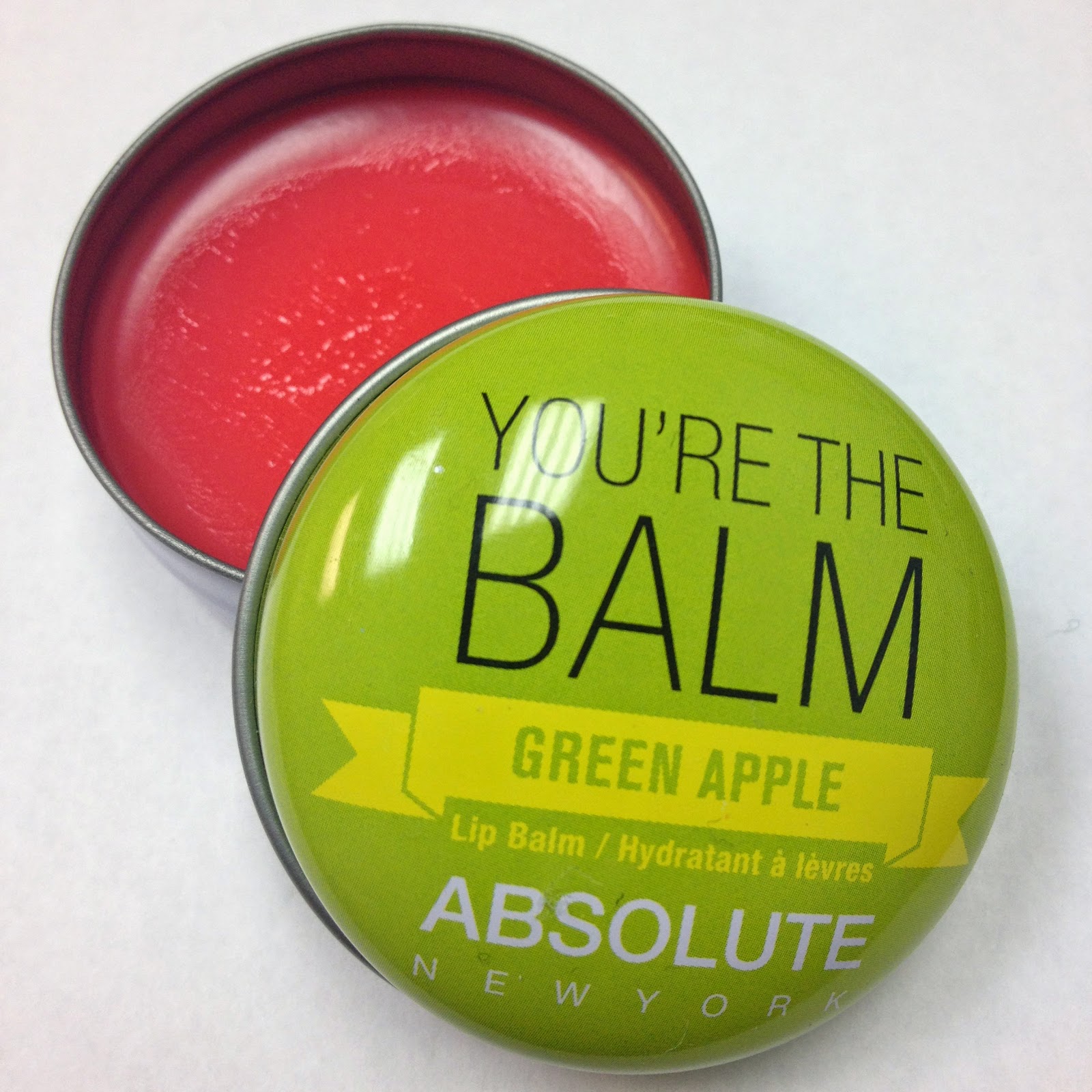 4. Lord & Berry Silk Kajal Kohl Eye Pencil in Black Silk: I wanted to love this pencil. I really did. But I didn't. It didn't stay in my waterline for any time at all. It's also a bit smudgy. 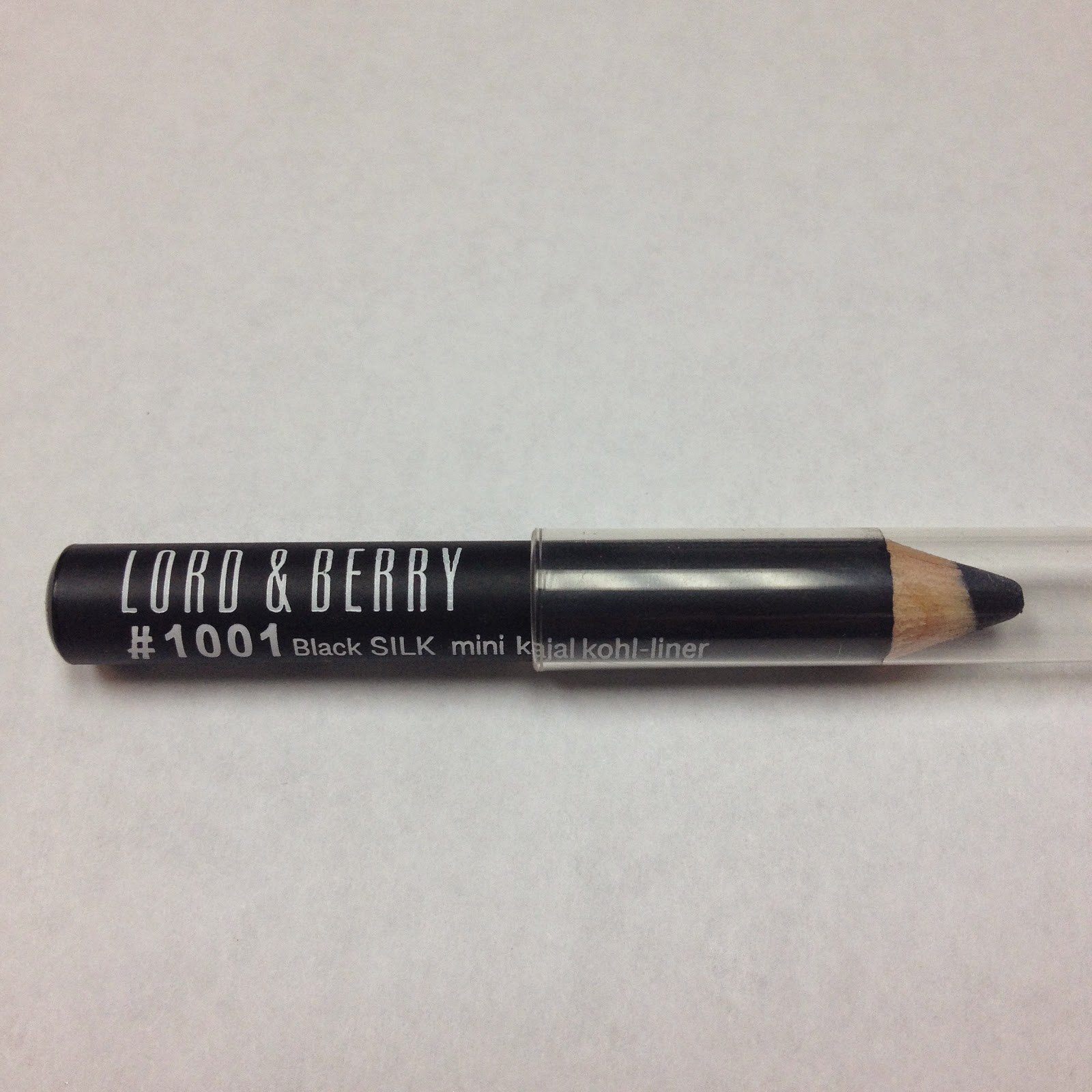 As you can see from the swatch below, the pigmentation isn't that great either. I'll use it because it's not the most awful liner I've ever had, but it's definitely not the best. Full size value $17 (although their site is down at the time of this post). Sample size value approximately $4.50. 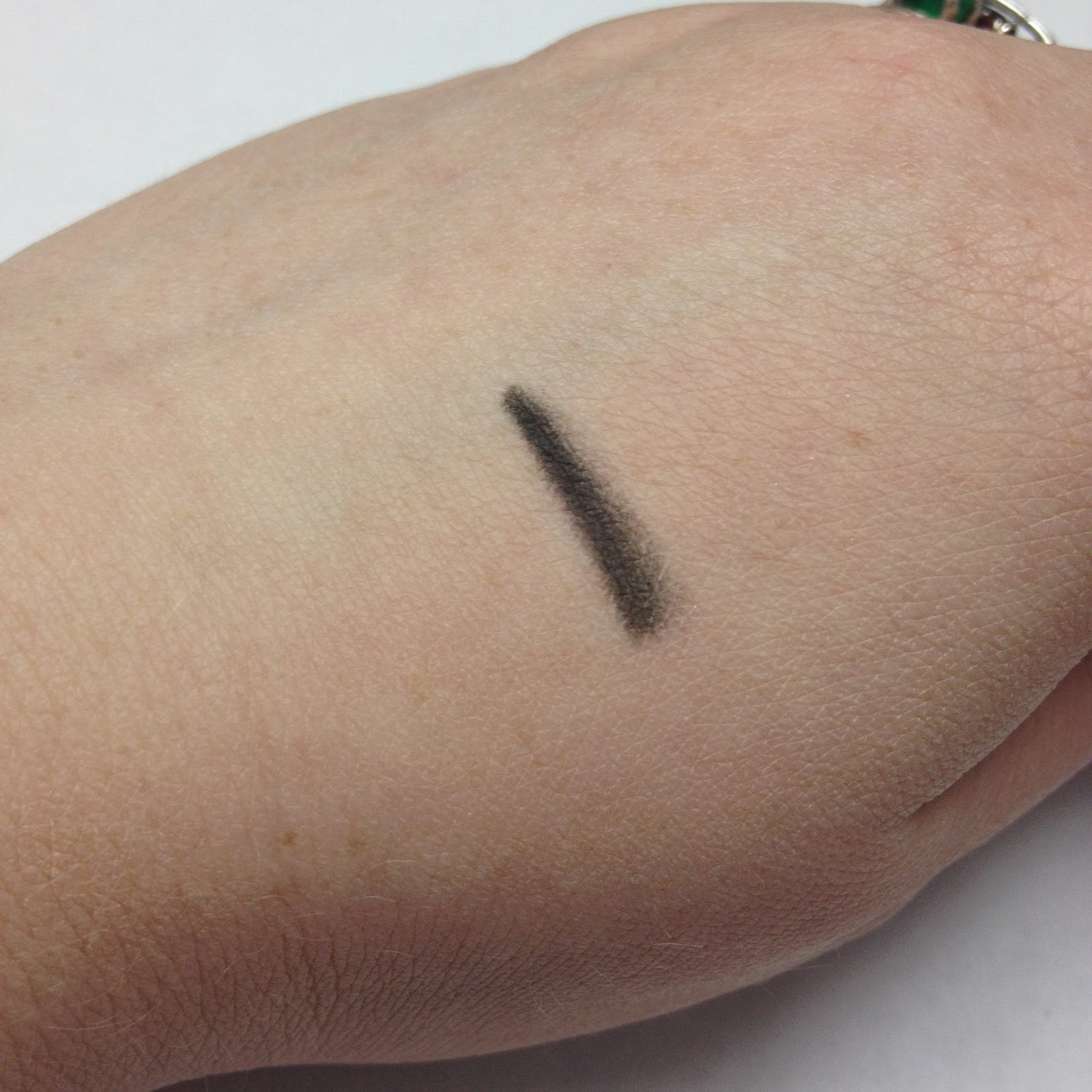 5. dr. brandt pores no more pore refiner primer- And now for the dud. You thought the eyeliner was the dud, right? Nope. This one's worse. This claimed to erase pores and to mattify skin. Over makeup, it did nothing. Under makeup, it did make my pores ever so slightly less visible. It wasn't mattifying at all. I had to set it. That's all forgivable. What wasn't forgivable was the major breakout I had after using this twice. Not cool, dr. brandt. Not cool. Full size value $45. Sample size value $11.25. 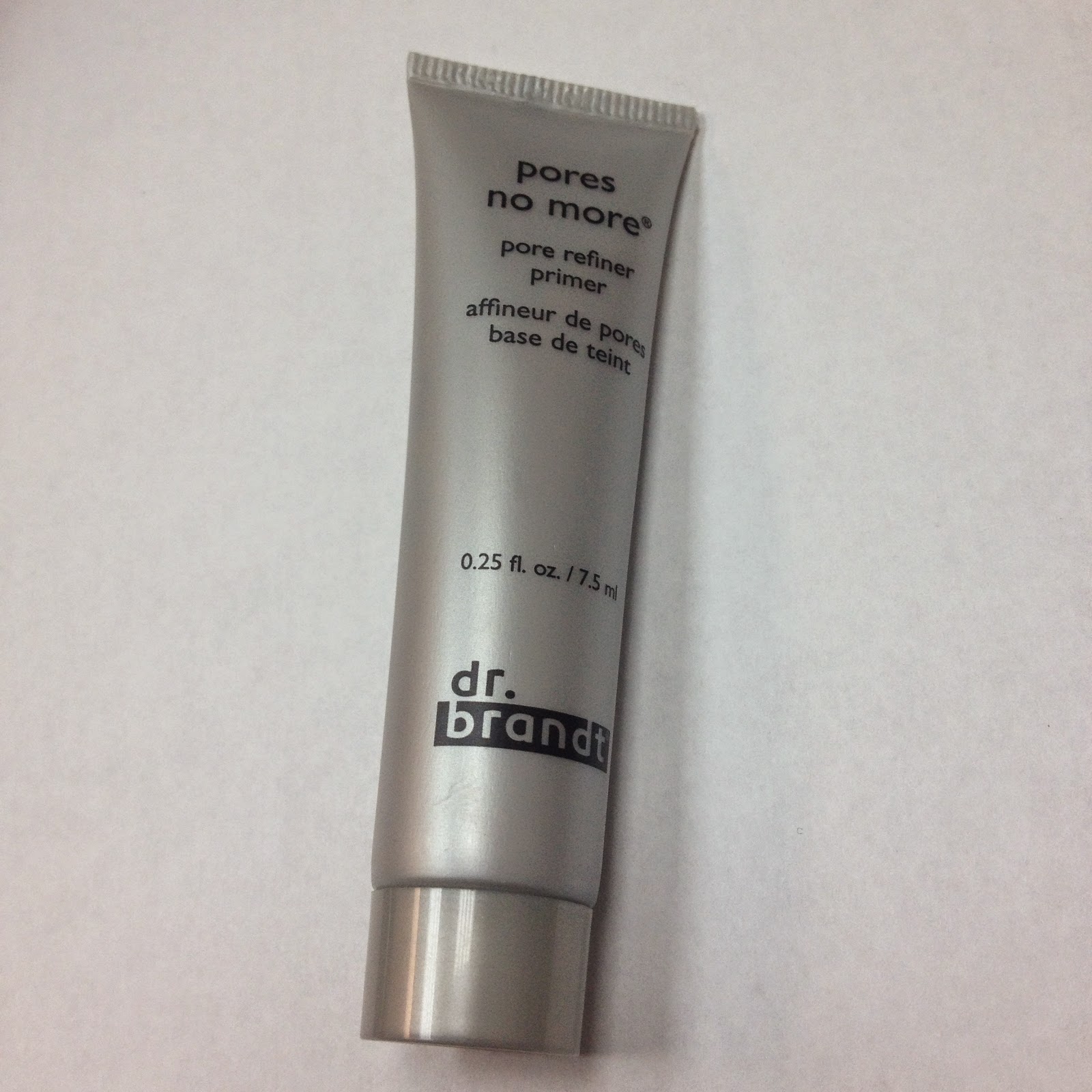 The bag itself is adorable. I love the orange polka dots. It's vinyl, so will be easy to keep clean. I think I'll use it for my brushes when I travel. I seem to have misplaced my brush roll, so this will come in handy. The overall total value for this month's bag is $26.29. Not bad for $10.

ipsy is a subscription service that is totally customized to your likes and dislikes. It's $10 per month. If you're interested in joining up and don't mind giving me some points, click and subscribe.

If  you already get ipsy, what did you get in your bag this month? (Just being nosy!)


I generally like to keep this blog as upbeat as possible, but with the recent suicide of the brilliant Robin Williams, I thought I'd share my experience with depression.

I've had depression as long as I can remember. When I was four years old, I spent the night at my grandparents' house. That was something I did on a regular basis. This one night, though, I had insomnia. I laid in bed for hours after everyone else was already asleep, sobbing because Grandma was going to die one day. She's still alive and well 33 years later. That's just who I was and who I still am.

When I was seven, I had my first suicide attempt. I still have the scar from that. I took a razor and sliced down my arm. Thankfully, it really hurt. I got Dad to bandage it up. When he asked how that happened, I mumbled something about playing with the razor. That was that.

After that, I tried drowning (really hurts) and starvation (that lasted three days). I thought about it often throughout junior high and high school. I had plans that never came to fruition.

When I was 25, I married the love of my life, moved to Ireland for three years, and had panic attacks every time I had to leave my apartment. I spent nearly every day in pajamas. My husband had to tell me to go shower.

For years I was fine. And then I had a baby. My postpartum depression was so severe that I had a "really good plan" that would not only get rid of me, but would get my family a new car. Because that's what's important, right? A new car. I had so many fantasies of running away. For some reason, my fantasies had me moving out west. Not to Oregon or Washington. No. To Arizona or New Mexico! Because that makes sense. Anyone who knows me knows that I hate heat. Summers are the worst. Summers in a desert? Not a hope! So clearly, I had that one planned out well. I started feeling better when my daughter was six months old.

Fast forward a few years and I'm complaining to my doctor that I'm exhausted. I was thinking that I had a vitamin deficiency or something. Blood work all came back normal. He began to ask me a few questions. And then some more questions. And then finally, after a lot more discussion, he said he thought he knew why I was having problems staying awake and keeping focused. (I hadn't even mentioned the panic attacks at that point.) He thought that I had depression.

He was the first to diagnose my problem in, at that time, 34 years.

It all made so much sense.

I went through several medications before I found one that sort of helped. I have another appointment coming up soon. I really don't know how that one is going to go. I've had a lot happening in the last year or so and have been down again. My idea of a perfect day right now is to spend it alone in bed. But, I get up, put on a happy face and keep trudging through.

I have a lot to live for. My daughter is amazing. My husband has been so supportive through everything. I have a lot of family and friends who love me.

At 37, I know now that I never really wanted to die. I just wanted the pain and sadness to stop. It was more than I could handle and I didn't know how to cope with it. Life can be overwhelming at times. Help is out there.

I recently read a quote that said something like, "Suicide isn't an act of a selfish person. It's the act of a broken person." (If I can find the exact quote and who said it, I'll update this.)

If you or anyone you know are thinking about suicide, please, please, please get help. It may not seem like it now, but the future you will be so glad you did. It really does get better.