What happens when the Man in the Moon falls in love with a Flower Fairy?

Marie Hall is a USA Today Bestselling Author and has always held a dangerous fascination for creatures that go bump in the night. And mermaids. And of course fairies. Trolls. Unicorns. Shapeshifters. Vampires. Scottish brogues. Kilts. Beefy arms. Ummm... Bad boys! Especially the sexy ones. Then the day came she realized apart from the sexy bad boy she married, there'd be no vampires/shapeshifters/mermaids/fairies/or even stinky trolls in her future unless she wrote about them. More often than not she can be found roaming the wild, lush tropical forest she calls her backyard (a.k.a. Hawaii) and day dreaming constantly about her latest project. Her Mad Hatter is the first book of her Kingdom Series. She loves to hear from her readers and can be reached at MarieHallWrites@gmail.com! Or friend her on Facebook! You can also find Marie on her Blog and Twitter.

More hotness from Marie Hall! Yay! As before, I wasn't paid for this post. I just really like this author's work.

Posted by Tabitha at 8:00 AM No comments:

Can I get a show of hands of how many of you have tattoos? Or have wanted a tattoo? (Or know that I have a back piece?) Well, my awesome brother David has a new studio just outside of Hamlin, WV called Tattie Zappers Studio! Woot!

He did mine and it's fab. Go check his site out. There's a gallery of his work. Ooh and aah over the details of the dragon. I know I did.


Thanks for reading! (And, seriously, go check him out!) 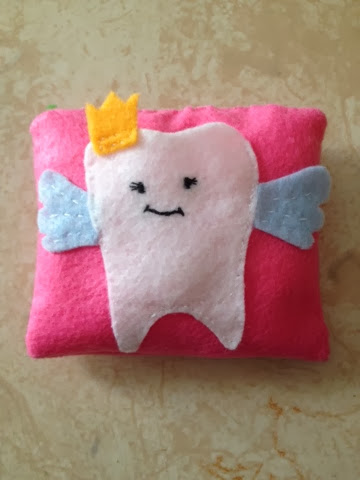 Zara's tooth is loose!!! That kid needed a pillow ready for when that finally happens, so I whipped this up out of felt. I used felt so I wouldn't have to deal with fraying and interfacing.

The tooth is a pocket to hold the tooth and Zara's money from the Tooth Fairy. Zara picked out all of the colors. I think it turned out really cute.

What are your Tooth Fairy traditions? Also, I can post the templates if you want. Let me know in the comments below.

Thanks for reading!
Tabitha

Posted by Tabitha at 4:06 PM No comments:

Once In A Lifetime

Hey, all!
If you love your fairy tales a bit twisted (or a lot twisted), this collection is for you! I've read Marie Hall's "Hook's Pan" and it was awesome. I'm a huge fan of her work, as I'm sure you know if  you follow me on Twitter or are friends with me on Facebook. I can't wait to get a chance to check out the others.

Now, this one is not for the kiddos. Adults only. And only for adults who aren't easily offended by adult...things. Keep reading below for the details!

P.S. I'm not getting paid for this post. Just felt the need to put that out there.

Limited Time Offer! This bundle will be on sale for $0.99
Regularly priced at $9.99
Love fairy tales... with a twist? Dive into 4 different worlds of fairy from four amazing authors of the genre. Read about a descendant of the brothers Grimm fighting to break a curse, Snow White who craves blood, fairy tale creatures buried in dreams whose true stories are written in the book of sands, and a Captain Hook who's thirst for Peter's blood is more than the stories have made it out to be. Whether you're looking for sensual romance, nail-biting fantasy, a new and sexy Snow, or a mysterious curse, check out this amazing boxed set from four bestselling authors of twisted fairy tales.

Mina Grime is unlucky, unpopular and uncoordinated, that is until she saves her crush's life on a field trip, changing her High School status from loser to hero overnight. But with her newfound fame brings misfortune as an old family curse come to light. For Mina is descended from the Brothers Grimm and has inherited all of their unfinished fairy tale business. Which includes trying to outwit a powerful Story from making her its next fairytale victim. To break the fairy tale curse on her family and stop these deadly events, Mina must finish the tales until the very Grimm end.

Mirror, Mirror, on the wall, Who is the Fairest of them all? In the sequel to UnEnchanted, Mina Grime discovers that all is not fair when it comes to the Fae and their tales, especially when they don’t all play by the rules. Barely surviving the Story’s first fairy tale quest, Mina still has hundreds to go before she can end the curse on her family. But a new player arises to challenge Mina while new rules revamp the game she has just barely begun to understand. All the while, people are mysteriously disappearing, including Jared, whom Mina must finally determine to be friend or foe. And with the loss of her greatest weapon, Mina must try to outwit a deadly hunter. Can Mina survive the most difficult quest yet while protecting those she loves from falling victim to one of the lethal tales of all? Or will she become a pawn when she strikes a bargain with the Queen of Fae?

"Lips red as rubies, hair dark as night. Drink your true love's blood, become the Vampire, Snow White." EVERY THOUSAND YEARS THE VAMPIRE QUEEN SELECTS A NEW BODY, ALWAYS THE FAIREST IN THE LAND, AND THIS TIME SHE'S CHOSEN SNOW WHITE. BLOOD AND SNOW: Snow White isn't an ordinary girl. She doesn't know that yet. REVENANT IN TRAINING: Snow has become something not quite human. She must discover how to live with the changes, hopefully without killing anyone. THE VAMPIRE CHRISTOPHER: Snow White craves blood. Especially the blood of her Hunter. But will drinking from him save or enslave her? BLOOD SOAKED PROMISES: Snow White must come to terms with her bloodlust. It's one thing to drink the blood of her Hunter, something else entirely to drink the blood of a human.

Cinderella is a witch destined to save the world and make out with her boyfriend.

Trishelle Page has known pain in her life, but instead of it making her weak, she's stronger. Confident. That is until the day a fairy kidnaps her during her staring role in Peter Pan's play and tells her not only do fairy tales exist, but that she's the soulmate of the pirate they call Hook, making her question everything she ever thought she knew. Captain James Hook is a man at the end of his rope. He's not the villainous bastard tales have made him out to be. So when the curvaceous blonde drops, literally, at his feet he aims to prove it to her. If only to get her into his bed. What neither one knows is that fate and magic are conspiring and they can deny the attraction all they want but the end is already written, it's just a matter of getting there.

Chanda Hahn takes her experience as a children's pastor, children's librarian and bookseller to write compelling and popular fiction for teens. She was born in Seattle, WA, grew up in Nebraska and currently resides in Portland, Oregon with her husband and their twin children; Aiden and Ashley. Learn more about this author visit her website chandahahn.com Follow her on twitter: www.twitter.com/chandahahn

RaShelle Workman is the international bestselling author of the Dead Roses series ("Sleeping Roses," book 1 in the series, has been translated into Turkish and is NOW available wherever Turkish books are sold), the Immortal Essence series, the Blood and Snow series, the Cindy Chronicles, and Touching Melody (A Forever First Novel). She's sold over three hundred thousand copies of her novels worldwide in the past year, including Japan, Canada, and Europe. You can find RaShelle all over the web, but the best place to start is on her blog: rashelleworkman.com.

Marie loves books that make you think, or feel something. Preferably both. And while she's a total girly girl and loves glitter and rainbows, she's just as happy when she's writing about the dark underbelly of society. Well, if things like zombies, and vampires, and werewolves, and mermaids existed. (Although she has it on good authority that mermaids do in fact exist, because the internet told her so.) She's married to the love of her life, a sexy beast of a caveman who likes to refer to himself as Big Hunk. She has two awesome kids, lives in Hawaii, loves cooking and occasionally has been known to crochet. She also really loves talking about herself in the third person. If you want to see what new creations she's got up her sleeves check out her blog: www.MarieHallWrites.blogspot.com or contact her personally at mariehallwrites@gmail.com.

Here's my biography below, where I'm supposed to say something cool about me, which I'm really terrible at. Things you might want to know about me: I write books that I can't find elsewhere, basically to amuse himself. Everything I do is for fun, so don't take me seriously, and never call me a writer. I hate that. I prefer the word: Storyteller. I am also full of flaws, but I'm improving everyday. If you like my books, horaaaay! I luv ya too. If ya don't, hoooray! Now we know in advance that this relationship isn't going to work. Although my books are ordinary on the surface, they hold many secrets that I might reveal one day. What matters the most to me are characters struggling to find their identities in the world. Things you don't need to know: I celebrate my birthday twice a year, the day I was born and Friday the 13th. I want to live in a bubble house, and I thinks circles are way cooler than triangles. I like boats, beaches, bears, beards, bears, bananas, bars, barfights, beans, bikes, bones, butter, babes, bakery, blizzards, and pirates ( I thought it was spelled Birates when I was a kid. ) Follow me: www.facebook.com/camjace twitter.com/cameronjace www.goodreads.com/CameronJace

Posted by Tabitha at 7:00 AM No comments: