It's been ages since I've posted. (Checks posts.) Yeah...it's been since last Halloween. I'm almost embarrassed. Almost. I've not been in a blogging mood, but I'm still creating. I've been watercolor painting and crocheting. I made my husband's and my dog's Halloween costume and the backdrop for our Trunk or Treat. I'll post all of that tomorrow. Probably. Check back just in case.

In the meantime I thought I'd try out Inktober this year. Inktober is the brain child of Mr. Jake Parker. He is an artist and came up with this idea in order to improve his inking skills. My ink skills are nearly non-existent, so it's a perfect challenge for me. I paint with acrylics, oils, and watercolors, I do digital art, and I draw with colored pencils. Inks are terrifying to me. I wanted to make this as simple as possible so I'd actually finish it. I used Jake's prompt list for the ideas. I packed a small art journal with a felt tip pen, a mechanical pencil, a white gel pen, a ruler, and an eraser (that weird yellow thing at the bottom of the picture below). If I had complicated anything at all, it would not have gotten done. Period. I know me well enough to say that with confidence.

I read up on tips and tricks to finishing Inktober. The one tip that really stuck out to me was "Pick a theme and stick with it!" I picked cats. I've had cats on the brain since rescuing the three babies in the first picture. Someone had dropped them at the bottom of my father's driveway. Their eyes were still closed and infected and they were crawling out in the middle of the road. Whoever did that to them had no intention of them living. They were in such terrible shape I didn't think they'd live the night, but they're now almost eight weeks and are thriving. That brings our cat total up to six. Six cats. I have six cats. (That's something I have to keep repeating to myself to try to make me believe it. I don't believe it.) 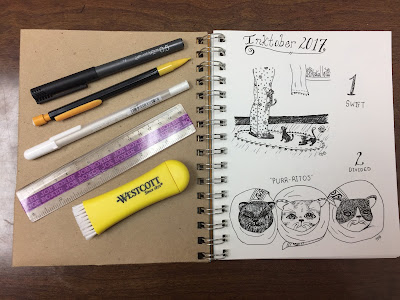 I thought I'd give a run-down of all of the pictures I've drawn. If you want to check them out individually, go see my Instagram. They're all there. Some were more successful than others and some are destined to end up as watercolors.

1. Swift - This is of Minnie climbing so quickly up my pajama pants. I'm okay with how it turned out. It's alright. Not my fave. Not the worst. Just alright.

2. Divided - We had given the kittens their first bath and had them wrapped up in hand towels. My daughter started calling them purr-ritos and I shamelessly stole that word from her. It's not stolen if I give her credit, though, right? This one will be my first watercolor from this series. 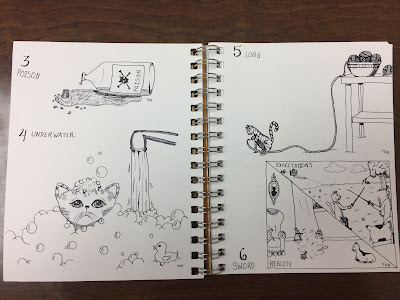 3. Poison - An upturned bottle of poison with a cat-headed skull and crossbones. So inspired! (Sarcasm font needed.)

4. Underwater - Minnie getting a bath.

5. Long - It's nearly impossible to have yarn out near cats.

6. Sword - This one was entirely my daughter's idea. I think I could have done a better job if I had been allowed pencils, but I'm not mad at it. 7. Shy - Minnie hiding behind a curtain.

8. Crooked - I'm pretty pleased with this one. I'm loving those crooked whiskers!

9. Screech - Minnie yelling her head off at me. She's a yeller.

10. Gigantic - This is Minnie playing with Caius's tail. I really love this one. 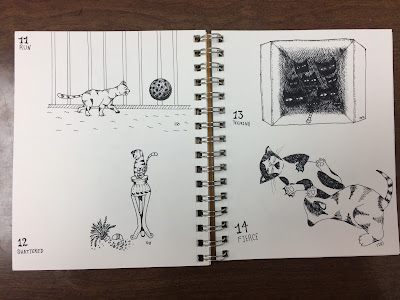 12. Shattered - Caius surveying the damage he caused. I love the attitude of the cat in this one. Caius never actually did this (as far as I can remember), I just really love drawing striped cats.

13. Teeming - A box teeming with cats (like my house currently). This is another one I might try again in watercolor. I do like how it turned out in ink, though.

14. Fierce - These kittens are so rough with each other. This is Minnie bullying Chip. 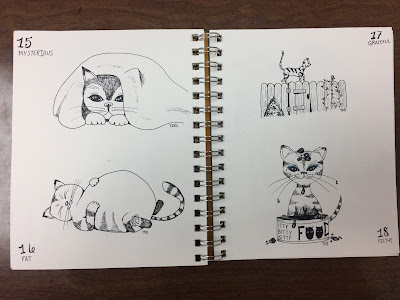 15. Mysterious - Chip hiding under a blanket.

17. Graceful - A cat on a garden fence. I think this would be beautiful in watercolor.

18. Filthy - The kittens used to practically bathe in the wet food when they first started eating it, which is why they had to have so many baths. I like this one, but I'm not thrilled with the eyes. They're not as cute as I was going for. 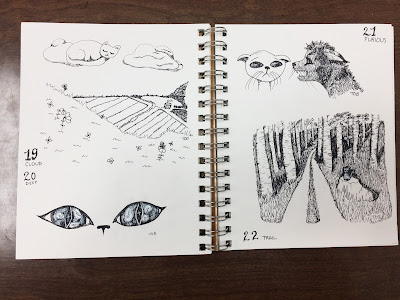 19. Cloud - A cat shaped cloud. Going to do a watercolor of this one.

20. Deep - I was aiming for galaxy eyes. Was very unsuccessful. Definitely going to try to paint this one, too.

21. Furious - Dunno why that one cat is wet, but he's blaming the other one. I straight-up don't like how this one turned out. At all. Not one bit.

22. Trail - I love this one and will probably be doing a painting based on this. 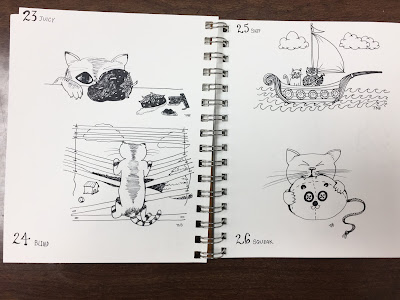 23. Juicy - These kittens will eat anything.

24. Blind - Cats are pretty destructive. I was happy with this one.

25. Ship - The Owl and the Pussy-cat went to sea in a beautiful pea-green boat...you know the rest. I love this one.

26. Squeak - I thought this one was adorable, if I do say so myself. 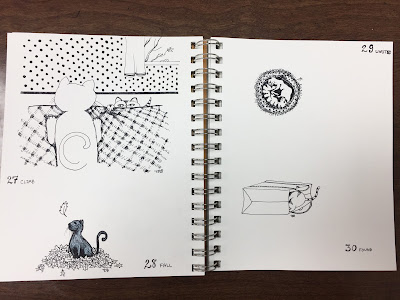 27. Climb - Kittens are excellent climbers. No place is safe.

28. Fall - I love, love, love the idea of this and will be painting this one soon.

29. United - Ever notice how cats sleep in a yin-yang configuration? It's adorable. I think I should have drawn this bigger in order to see the details a bit better. 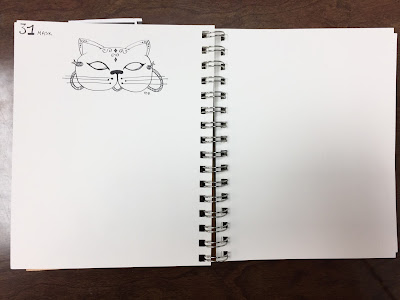 31. Mask - I made it all the way through! I feel like I deserve a trophy or a cookie or something for following through. (Preferably a cookie.)

This was a lot of fun and I'm so glad I did it. I don't feel like I'm any more skilled at ink than I was before, but I am more confident. That first picture took me forever to work up the nerve to start. That last one was barely a fully formed thought before it was finished. So...that's progress, right?!?